In addition to its role in driving oxidative metabolism, ambient O2 levels carry information of great interest to cells of both unicellular and multicellular organisms. For example, O2 regulates gene expression and modulates ion transport across membranes, and cells can migrate toward or against O2 and metabolically adapt to changes in O2-levels. An important mechanism of O2 sensing in animals involves a cytoplasmic/nuclear prolyl 4-hydroxylase (PHD), an O2-dependent enzyme that modifies selected Pro-residues in the transcription factor subunit HIFlpha. We have discovered that PHDs also mediate O2-signaling in unicellular organisms, using the NIH model organism Dictyostelium. Dictyostelium is a social soil amoeba that, in response to nutritional deprivation, aggregates to form a multicellular slug that migrates to the soil surface to form a fruiting body (Fig. 1). An important factor that regulates conversion of the slug to a fruiting body, and the differentiation of spores in the head of the fruiting body, is sufficient O2 (Fig. 2). In the context of its environment, it is likely that the local O2 level is used by the slug to know where it is. Our work has shown that, in contrast to animals in which PHDs trigger the ubiquitination and proteasomal degradation of the HIFlpha transcription factor subunit, protist PHDs (referred to as PhyA) appear to regulate the activity of Skp1, a subunit of the SCF class of E3-ubiquitin ligases (Fig. 3) that control the stability of critical regulatory proteins such as cAMP phosphodiesterase. Current studies are probing the ways in which PhyA mediates sensing of O2 and metabolic states, and how control of Skp1 is integrated with other environmental signaling pathways that control starvation-induced developmental progression. We are also investigating a predicted lysyl hydroxylase implicated in epigenetic regulation because it associates with Skp1 and, like PhyA, this jumonji-C domain containing protein is likely subject to environmental and metabolic regulation. Dictyostelium is an excellent experimental surrogate for our parallel studies on eukaryotic pathogens of humans including the apicomplexan Toxoplasma gondii, and of plants including the oomycetes Phytophthora and Pythium. For example, in studies with Ira Blader (Buffalo), we found that phyA of Toxoplasma can substitute for the Dictyostelium gene to support O2-sensing during development (Fig. 4). 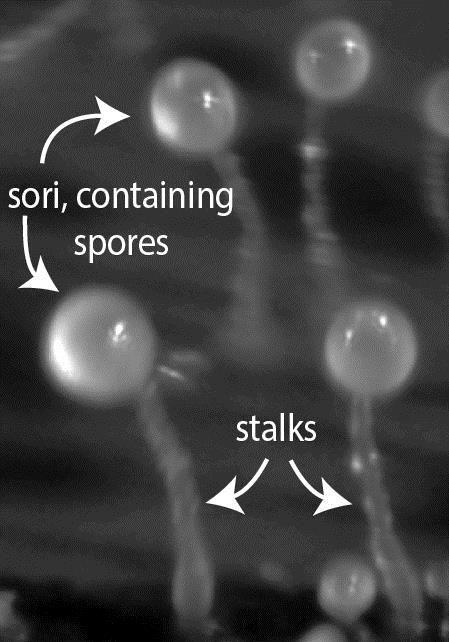 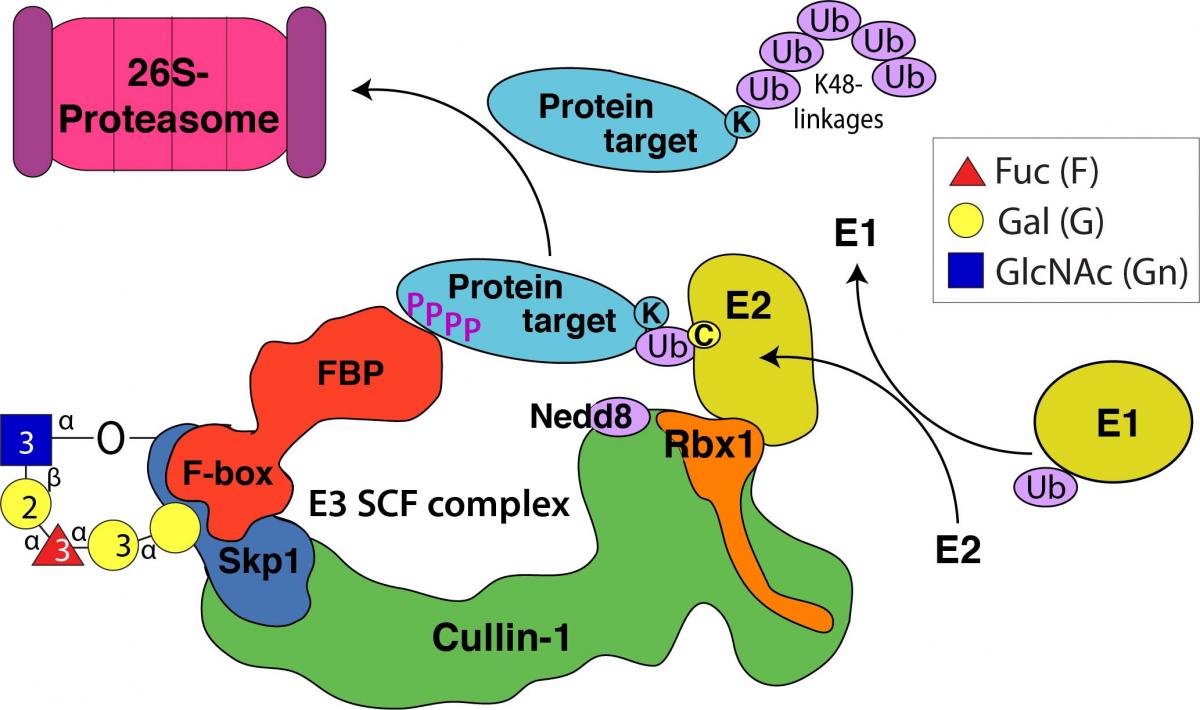 Fig. 3. Cartoon of an SCF-type E3 ubiquitin ligase.
Shown at the right is the donation of Ub-chain to a Cys of the E2-subunit,
which will transfer the Ub to the target substrate docked onto the F-box protein
receptor (via its phosphodegron), which is in turn linked to the E2 via Skp1, Cullin-1,
and Rbx1. Multiple cycles of K48 ubiquitination generate a signal that is recognized
for degradation by the 26S-proteasome. Skp1 is subject to novel regulation by
hydroxylation of Pro143, and subsequent glycosylation (colored symbols on left),
which promote the interaction of Skp1 with F-box protein substrate receptors.
Adapted from Y. Yoshida.

GLYCOREGULATION IN THE CYTOPLASM AND THE NUCLEUS

Glycosylation, best known as a major posttranslational modification of secretory, cell surface and many internal membrane proteins, is also a prevalent modification of intracellular cytoplasmic and nuclear proteins. We have discovered an O-glycosylation pathway of unprecedented sophistication for the cytoplasm, which mediates assembly of a novel linear pentasaccharide on Skp1 (Fig. 5). The pentasaccharide is assembled on the hydroxyproline generated by PhyA, and appears to have co-evolved with prolyl hydroxylation of Skp1 across unicellular eukaryotes. Our findings in Dictyostelium indicate that each sugar in the glycan has a distinguishable developmental function that modulates O2-sensing by PhyA in a hierarchical fashion. Mass spectrometric and gene tagging studies have shown that the Skp1 interactome is modified by glycosylation, which supports increased assembly of SCF complexes. The effect was partially recapitulated by in vitro studies with recombinant Skp1 glycoforms and a model F-box protein. Biophysical studies on Skp1 glycoforms including circular dichroism (with Karla Rodgers), small angle X-ray scattering (with Blaine Mooers), and 1H/15N-HSQC-NMR (with Brad Bendiak and Jim Prestegard), reveal dramatic changes in conformation. Taking a reductionist approach, studies in collaboration with Carol Taylor (LSU) show that hydroxylation and glycosylation influence the conformation of model Skp1 dipeptides (Fig. 6). Remarkably, the terminal glycosyltransferase AgtA is a Skp1-binding protein whose inhibitory effects on Skp1 appear to be moderated by glycosylation (Fig. 7). 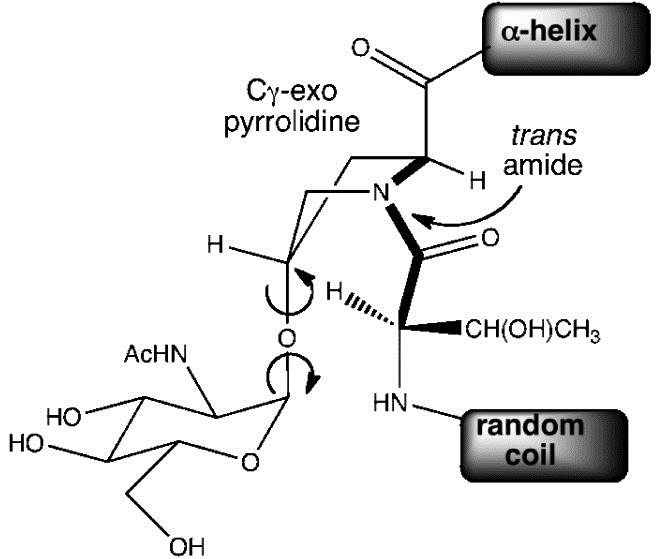 Fig. 6. Conformational effects of Pro143 modification.
NMR studies on capped synthetic dipeptides show that
Pro hydroxylation and alphaGlcNAcylation promote, in
additive fashion, the exo-state of the pyrrolidine ring, and
the transconformation of the Thr-Pro peptide bond, as shown.
This may contribute to decreased homodimerization and
increased interaction with F-box proteins that occur upon
glycosylation of Skp1. See Karunaratne et al. (2014) JACS
136:15170. 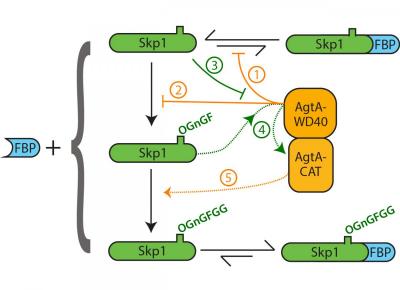 Our current working model is that intrinsic conformational effects of hydroxylation and glycosylation on Skp1 (Fig. 8) promote assembly with F-box protein subunits of E3SCFubiquitin-ligases that in turn control the turnover of critical regulatory proteins to allow progress through the developmental program (Fig. 9). Ongoing and future studies are focused on structural analyses to inform mutational perturbations for testing the model in vitro and in vivo, optimization of advanced mass spectrometric methods to identify additional F-box proteins and their substrates, reverse genetic studies to examine their functions, metabolomics studies to investigate regulation of glycosylation, and investigation of the model in Toxoplasma gondii and other pathogenic protists where we have documented existence of the glycan.

Fig. 8. Model for effect of glycan on Skp1 conformation. Molecular dynamics simulations selected by NMR-derived constrains indicate that Skp1 adopts a more open conformation when glycosylated that may support increased interactions with the F-box domain. Panel B compares the average conformation of glycosylated Dictyostelium Skp1 with unglycosylated Skp1 of panel A. Panel C illustrates hydrogen bonds detected, and panel D is a space filling model of the glycan pose. Panel E shows that despite a different glycan sequence in Toxoplasma Skp1, the pose is compatible with the Dictyostelium model. See Sheikh et al (2017) J. Biol. Chem. 292:18897-18915 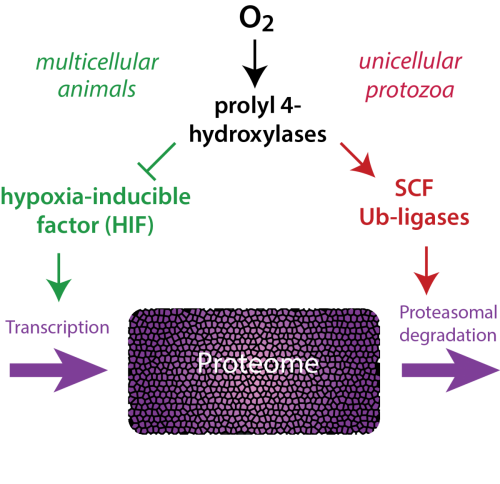 Mucin-type O-glycosylation in microbes: O-glycosylation is a major modification of proteins processed by the secretory pathway en route to their destinations at the cell surface or other organelles. Mucin-type O-glycosylation, a major class initiated by attachment of an lpha-linked GalNAc sugar to Thr- or Ser-residues in animals, was, based on our findings, evolutionarily preceded by alpha-linked GlcNAc in protists, where together with phosphoglycosylation it plays myriad roles in trafficking, cell interactions, and cell wall assembly. Our recent discovery of the glycosyltransferase homolog that mediates mucin-type O-glycosylation in the Dictyostelium Golgi opens new avenues to investigate the mechanism and function of O-glycosylation in the agent for Chagas disease, Trypanosoma cruzi, where mucin-type O-glycosylation is thought to be an important virulence factor. In addition, related genes are found in pathogenic bacteria, suggesting that mucin-type O-glycosylation has an unanticipated ancient prokaryotic function. We have found, in collaborative studies with Norton Heise (UFRJ, Rio de Janeiro), that TcOGNT2 in T. cruzi is naturally down-regulated during metacyclogenesis, and that forced maintenance of its expression is inhibitory by a mechanism that does not require its catalytic function. In addition, we have found that knockout of a gene related to the alpha3-galactosyltransferase of Dictyostelium Skp1 interferes with production of bloodstream trypomastigotes in cell culture and mouse infection models. Future studies are planned to investigate the mechanism and function of cell surface O-glycans in this and related organisms.

Glycosylation targets free lipids, GPI anchors and numerous amino acids in up to half of all proteins. The principle is similar in unicellular organisms including a host of eukaryotic parasites such as Trypanosoma cruzi and Toxoplasma gondii, which are agents of Chagas disease and toxoplasmosis, respectively. But the specific sugars and responsible genes are group and species specific, complicating their experimental analysis by non-glycoscientists. Given studies that document the importance of cell surface glycosylation in parasite biology and virulence, we have embarked on a systematic effort to facilitate genetic approaches to confirm and extend our understanding. In collaboration with Rick Tarleton and Lance Wells, candidate glycogenes will be targeted by CRISPR/Cas9 and consequences on the glycome will be profiled. The guide RNA sequences and glycomic consequences will be disseminated to the parasite community to enable new investigations of how glycosylation interacts with other signals to control cellular activities.

Links: For information on Dictyostelium, the model organism utilized in many of our studies, see www.dictyBase.org. For other glycobiology links, see the Society for Glycobiology webpage http://www.glycobiology.org.